Okay, back to the subject of Spain, since I only mentioned San Sebastian….

In Barcelona I met up with fellow cougs Ashley and Lauren (who are also keeping blogs which I added to my blogroll). It was nice to see some familiar faces after a long bus ride where I couldn’t understand anything or talk to anyone. I like travelling alone, but I think in the future I probably won’t go to countries where I don’t speak the language without another person. 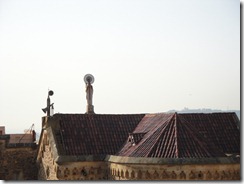 Barcelona was a cool city. One and a half days there was not enough, but sadly I don’t think I will ever return – there are too many other places in the world to see. I was fascinated by all of Gaudi’s architecture, but I think Paris is a much prettier city overall (sorry Goonting!). 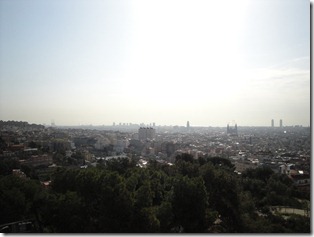 Our first night there we went out for some awesome Spanish cuisine! Ashley got regular Sangria, but Lauren and I ordered the Sangria Cava Blanc. I’ve had my fair share of regular red Sangria in France, but this drink was incomparable.So delicious and very large! 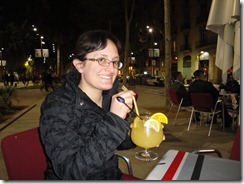 And some yummy yummy Paella! (Mom – your paella is still the best = ) 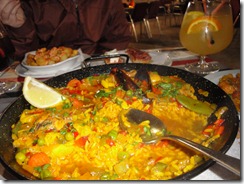 The waiter tried to convince us that this wouldn’t be big enough for 2 people – haha, I’m glad I stuck to my intuition and told Lauren it would be.

The next day I went to Park Guell, which was amazing! 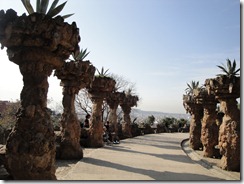 The best of Gaudi is of course the Sagrada Familia.

This church has been under construction for 150 years and won’t be finished for60. Seeing other USAC student’s pictures of this place is what made me decide Barcelona was a must-see. 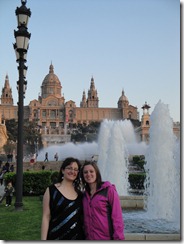 For my second (and last) night here, we went down to this fountain for an awesome show (complete with cheesy American music) and saw the remnants of the Olympic games!

Thanks to Lauren and Ashley for being great travelling companions and have a safe trip home next week!